In 2020, GFEMS funded a study, conducted by Responsible Business Alliance (RBA), in collaboration with Verité, Ulula, and the Fair Hiring Initiative, with Vietnamese migrant workers at four destination workplaces in Taiwan through an anonymous, encrypted mobile-based voice survey. The study aimed to capture insights into the recruitment and employment experiences of Vietnamese workers in Taiwan, as well as identify opportunities for improvement in labor recruitment practices in the corridor. The learnings from this pilot of a digital worker voice survey are also intended to contribute to the evidence base on digital worker voice tools, assessing their applicability for identifying risks, monitoring workplace improvements, facilitating access to remedy, and quantifying effects of anti-slavery interventions.

Fee charging was prevalent across the board among the surveyed population of workers, with reported fee amounts ranging from $150 to $6,200 USD and an average fee amount $4,038 USD.

Grievance mechanisms did not appear to be sufficiently available or utilized among the respondent population– only 36% of respondents reported that they had been provided with an anonymous and safe grievance channel by either their employer or recruitment agency.

Government and industry stakeholders should move toward “zero-fee” policies

Government and industry stakeholders should move toward “zero-fee” policies that are enshrined in formal, enforceable written agreements between buyers and suppliers, as well as between suppliers and their recruitment partners. Buyers and facilities should conduct regular due diligence to determine whether workers are being required to pay recruitment fees or recruitment-related expenses, such as visa-processing or work permit fees.

While digital channels are an effective complementary way to gather information, they should not be considered a replacement or substitute for on-site social audits or investigations.

Digital worker engagement systems can serve as a mechanism for risk screening, baseline and impact measures, and enabling channels for workers to report grievances and access remedy. Digital technologies can enable continuous engagement with workers, filling the gap in consultation and data collection in between audits and other on-site assessments.

What do they need to know? Talking to different stakeholders about forced labor in Bangladesh's apparel sector 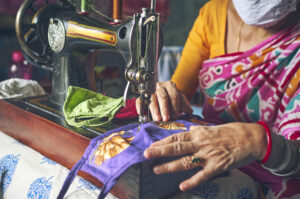